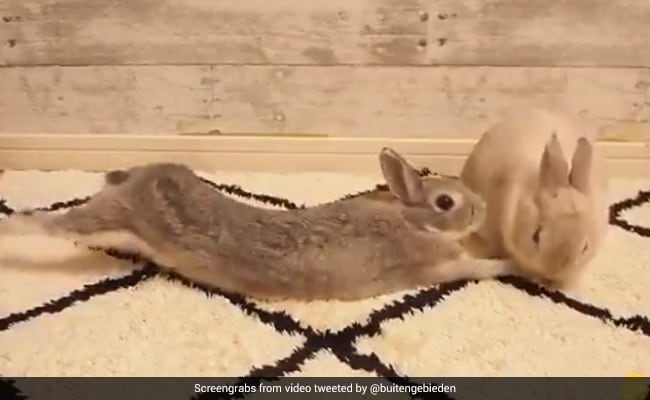 Cute and funny animal videos are a very popular source of entertainment on the Internet these days. In the current era, a large number of Internet users like to watch such videos. If you also like to watch such videos, then you are at the right place because a very cute animal video has surfaced on social media. This 19 second video is being seen and liked a lot. This video has been viewed more than 2 lakh times and has been liked more than 14 thousand times and more than 2 thousand people have retweeted this video post on Twitter.

How to get a kiss.. pic.twitter.com/JgmIbkUR5k

Learn to ‘kiss’ from a rabbit
In this video, two bunnies i.e. rabbits are seen and both of them are sitting at a short distance from each other. Then a rabbit stretches its whole body and tries to go to its partner. But he does not get any reaction from his partner. After this, he stretches agar more times and goes to the other rabbit and this time starts kissing him with him. The caption of this video reads, ‘How to get a kiss’. When you also watch this video, you will definitely repeat it many times.

This video has been posted from the Twitter handle of Netherlands and such cute animal videos are often posted on this handle named Buitengebieden and users like these videos very much. Earlier recently a video of a small dog was posted on this page. In the video, the puppy was seen standing in the water and the fish were coming and kissing him one after the other. If you also like this video, then definitely let us know.