When the road became a cricket pitch and a batsman running to take a run was hit by a bike, see VIDEO 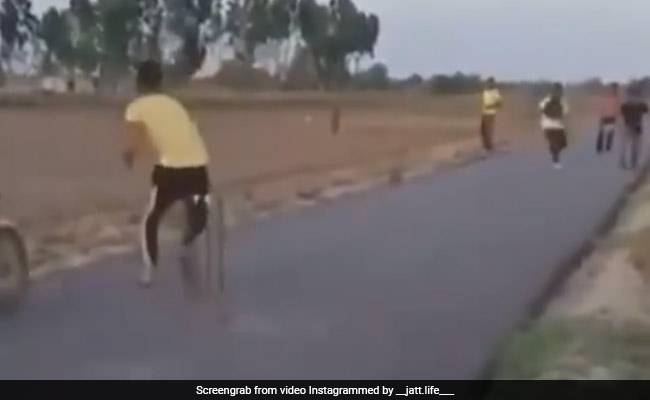 Watching funny videos on the Internet is a very popular means of entertainment at the present time. If you also like to watch such videos, then today a unique video has been shared on the Instagram page named Jatt life. After watching this video some questions will definitely come in your mind that how are the people in the world. Although this video is of a road accident, but this accident also happened in such a way that the viewers could not take their eyes off the video. After watching the video, you decide whose fault is it. No matter how many questions arise, but one thing that is certain is that you will definitely enjoy watching the video and to get answers to these questions, you will also watch the video many times by repeating it.

cricket fandom
Cricket fever is nothing new in India. In India, it is considered more a religion than a sport. People even worship cricketers. This game is played everywhere in India. On the roof, in the field, in the fields and even on the roads. But in this video you will see some boys playing cricket on the road. A person bowls and the batsman hits a hard shot in the leg side and runs for running. As soon as the batsman starts running, a bike rider comes from behind and both of them collide. In the background of the video, you will also hear the commentary of former Indian cricketer and famous commentator Akash Chopra, which makes this video more fun.

Funny reaction giving users
Users are making very funny comments on this video. One user wrote that both the batsman and the bike rider who hit the shot are insane. Cricket should not be played on the road, but when they were still playing cricket, did the bike rider not see this?