When King Cobra preyed on Indian Cobra, the picture is becoming fiercely viral on the Internet 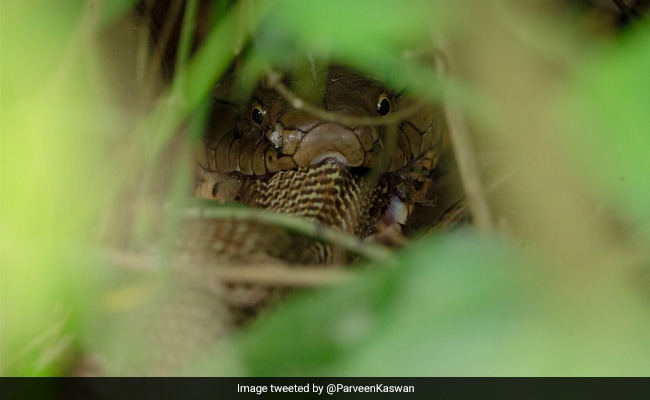 There is hardly anything else in this world that is a bigger mystery than nature. The unsolved mysteries of nature are probably beyond our thinking and imagination. However, in this digital age of the Internet, many interesting things are easily known. Recently, a picture is in the news on Twitter. In which such a scene has been captured in the camera which you have rarely seen before so close. This photo is being liked a lot on Twitter and people are fiercely giving their reactions on it. This picture has been captured by IFS officer Parveen Kaswan in his camera.

What is special in the picture?
In this picture, a King Cobra is seen swallowing the Indian Spectacled Cobra. This picture was taken from behind the bushes in the forest. The King Cobra’s eyes are worth seeing in this picture. A different form of wildlife is visible in its eyes. For some people this scene can also be very intimidating. A user has also edited and written a caption in the picture which means that these eyes are hypnotizing.

King cobra eats snakes smaller than itself
Parveen told in her post that the scientific name of King Cobra is Ophiophagus Hannah. Ophiophagus is a Greek word which means ‘snake eating’ or snake food.

the only snake to make a nest
According to Parveen, King Cobra is the only snake that makes its own nest, that is, its place of residence. As its name suggests, it also behaves like a king. It is one of the most dominating snakes in the forest. The food of this snake is often only other snakes.