Kangana Ranaut spoke on the role of a Sikh soldier in ‘Tejas’, ‘This had an instant smile on my face’ Kangana Ranaut also revealed that the shooting of ‘Tejas’ will begin this spring, which is also the month of her birthday.

Directed by director Sarvesh Mewara, Kangana Ranaut will be seen as an Indian Air Force officer in this film. Kangana has told in one of her latest posts that, till now she did not know that her character in this film is of a Sikh soldier.

Mumbai. Bollywood Kangana Ranaut started shooting for the film ‘Tejas’ with a look test. He has recently revealed that he still had no idea that his character in the film is that of a Sikh soldier. He also shared an image of his character’s name printed on the uniform.

After rapping the shoot of her action thriller movie ‘Dhakad’, Kangana Ranaut has started working for her new project ‘Tejas’. The actress recently revealed through a post on social media that she has started her shoot with a look test for the upcoming film.

He also revealed that the shooting of ‘Tejas’ will begin this spring, which is also the month of his birthday. Kangana Ranaut will be seen in the role of an officer of the Indian Air Force in this film with director Sarvesh Mewara’s debut. In one of the latest posts, the ‘Queen’ fame actress has shared with her fans that, till now, she did not know that her character in this film made under the direction of Sarvesh Mewada is of a Sikh soldier. 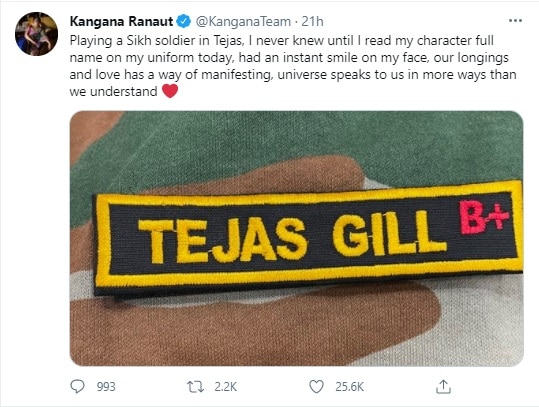 Kangana has shared an image on her Twitter handle, which shows her character’s name ‘Tejas Gill’ in the film, which is printed on the uniform. In the caption of this image, he also mentions that, reading the script of the film, ‘Instant Smile’ came on his face. The Thalaivi star tweeted, ‘I am playing a Sikh soldier in Tejas. I did not get to know this until I had read the full name of my character on the uniform. It had instant smile on my face. There is a way to appear in our longings and love, the universe talks to us in more ways than we understand.

Meanwhile, Tejas is financed by Ronnie Screwvala’s RSVP. Giving information about the upcoming flick, Kangana first told Mumbai Mirror that she hoped the film would instill a sense of patriotism and pride among the youth. Apart from ‘Dhakad’, the actress still has J.J. There are projects like Jayalalithaa’s biopic ‘Thalaivi’ and Manikarnika Returns: The Legend of Didda. Kangana has also completed shooting for ‘Thalivee’.